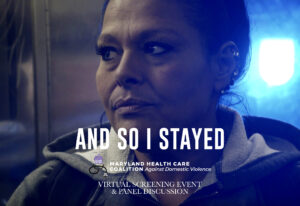 “And So I Stayed” is an award-winning documentary about survivors of abuse fighting for their lives and spending years behind bars. These women paid a steep price with long prison sentences, lost time with loved ones, and painful memories. Formerly incarcerated survivor-advocate Kim Dadou Brown, who met her wife while incarcerated, is a driving force in the passage of New York’s Domestic Violence Survivors Justice Act (DVSJA), a new law meant to prevent survivors from receiving harsh prison sentences for their acts of survival. Nikki Addimando, a mother of two young children, suffered the consequences when a judge didn’t follow the law’s guidelines. Tanisha Davis, a single mother who was ripped away from her son in 2013, is hopeful the new law is her way out of a harsh prison sentence.

Help us educate health care providers to make a difference in the lives of survivors.